OverviewFire Emblem: Path of Radiance serves as the first incarnation of the Fire Emblem franchise to embrace the realm of the third dimension while continuing the series' focus on turn based combat in a medieval setting.
Sheras rates this game: 5/5

This is one of my all time favorite games. Fire Emblem: Path of Radiance is the lone GameCube installment of the Fire Emblem series. It is a tactical based turn by turn strategy game, much like Advance Wars, Final Fantasy Tactics, or Tactics Ogre.

In FE: Path of Radiance, you now have a more 3D view of the battlefield, rather than the traditional 2D top down view that is used in the previous games. The main character of the game is Ike, a member of the Greil Mercenaries, his father's company. Ike is also featured in the Wii version of Super Smash Brothers, taking the place of Roy from the GameCube version (a Fire Emblem character but not in this game, along with Marth (another Fire Emblem character but not from this game).

Several improvements in the general gameplay to the Fire Emblem series were also made in this version. The first one worthy of note is how you can rank up your characters. Like previous Fire Emblem games, the max level of a character is 20, and then you can use a special item, unique to certain classes to promote the unit to a stronger class, resetting their level to 1, but keeping their stats, allowing them to raise 20 more levels to improve. In Path of Radiance, you are not forced to wait to find those items to promote your units, upon hitting level 20, they can still gain experience, and upon hitting level 21, they will be promoted to the next class, and go back to level 1. The second great improvement is the addition of Bonus XP. You can start using Bonus XP a few chapters into the story. This allows you to give XP to units while you are at base. The greatest use I find for this is to give this XP to lower level weak units, to get them stronger so you don't have to be so careful with them during missions. However, you must not spend so much Bonus XP on one unit, because then they will max out quickly, and their weapon levels will not correspond too well with their stats (Having a maxed out level 20 promoted character only using C-grade or below weapons is not a good thing!)

A few little tips to get you started:
1) Use Ike ALOT. He becomes extremely powerful, and late in the story he gets a weapon that only he can use which is also extremely strong, so don't let it go to waste!
2) Use Nephenee. She may seem a little weak at first, but she grows into a complete monster.
3) Be careful when using Sothe. Sothe is the first thief class you get. However, Sothe cannot be promoted (this ties into the Wii version of FE). He does get some insane stat growths because of his ability Blossom, but they aren't what Volke (another thief) can get to if you get him promoted and maxed out.
4) Make use of the Support feature. So many people don't use this. Certain units have good relationships with other units, and by having them fight side by side, this relationship can grow, making them better when they are near each other.

Fire Emblem Path of Radiance is a tactical RPG developed by Nintendo's Intelligent Systems, it was released in 2005. It is the 9th game in the Fire Emblem series, but has no story relations to any of its predecessors. The game takes place on a continent named Tellius. The king of Daein: Ashnard is planning to invade the neighboring nation of Crimea and engulf the region in war as well as enslaving the beast tribe of the nation of Gallia. The game follows Ike - a citizen of Crimea who joins as an official member of his father's mercenary group known as the Greil Mercenaries. The mercenarys meet a young woman who claims to be the Princess of Crimea who's identity was kept secret for retaining order in her family's throne. She fled the castle when Daein attacked and is lost and alone. The Greil Mercenaries cautiously believe her tale and are hired as her retainers and to fight the Daein army. With the exception of Fire Emblem Gaiden, Intelligent Systems never really changed the core game design concept in the Fire Emblem series (Fire Emblem on the NES was the very first tactical RPG, if I'm not wrong). Instead they improve and polish the formula with nearly each game. The game is played sort of like a chess. The player chooses characters in a field with each type of character acting as a type of unit with its own abilities and states. For example an archer can only attack when he's at least 2 spaces away from his opponent which means the he can only be countered by a projectile but he can only travel short distances at a time, while a swordman or axe welder can only use melee attacks unless he's carrrying a certain weapon that can be used as a projectile. While a horseman can travel great distances. There's also a sort of rock paper scissors system in which using certain weapons against others (let's say a sword against an axe) can get better results. But weapons grow dull after use and can break. The player has to make sure that the group's well equiped during their stay in camps before moving into battle. The series is famous for its permanent death feature. When a character dies he dies. There is no way to revive someone after he or she was defeated. -----The game's outstanding writing and plot is its greatest achievement. Political, sharp, witty, and acknowledges that there can be various points of views to a dire situation. It is also one NoA's Treehouse greatest translation work, it really shows that - especaily during the GameCube days - they were in a league of their own when it comes to translating text. The battles are long, addicting, and they really force the player to think a few steps ahead before reacting. But because the game only allows saving inbetween battles, it can be infuriating when a mistake was made and a character was lost, which leads many players (myself included) to restart the chapter. Still, Path of Radiance is easily my favorite in the series and quite possibly my favorite tactical game.

Really good. I have to say it was a lot better than i had expected. The great and wonderful story line keeps you wanting to play every mission. It also brings very good realistic characters and levels.

First console installment of the strategy-RPG series since the SNES days. Previously released on Famicom (Japan-only), Super Famicom (Japan-only), and Game Boy Advance, Fire Emblem leaves the 2D overhead maps of old behind to serve up 3D villages, fields, and caves, and polygonal battle sequences. The continent of Tellius is divided into humans and half-man/half-beast demi-humans. These two races have battled for centuries and only recently established an uneasy peace. Now, a new force threatens to tear apart the seven kingdoms and reignite the flames of war. Joining the Fire Emblem ranks are new units, such as such as the shape-shifting laguz who transform into beasts to attack their foes. Additionally, characters can now learn unique skills as they gain experience, giving players even more ways to customize their strategy.

Tip: Click on the above image to see more images!

Now you can add videos, screenshots, or other images (cover scans, disc scans, etc.) for Fire Emblem Path Of Radiance to Emuparadise. Do it now! 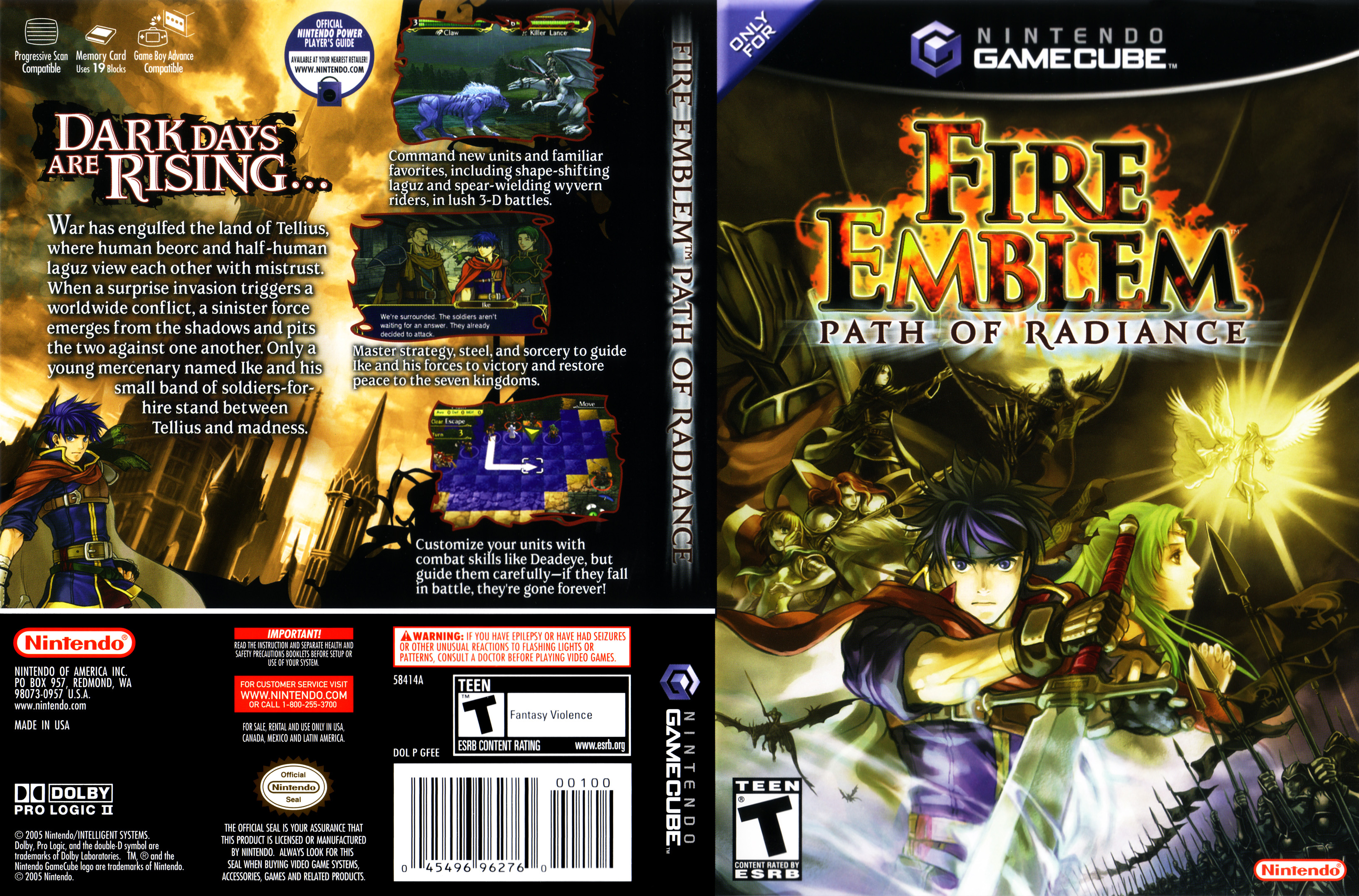