Other albums by Maroon 5 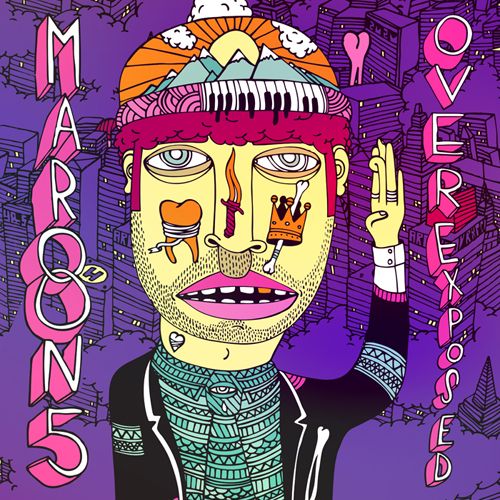 Maroon 5 settled into a cleanly contoured blue-eyed soul groove on 2010's Hands All Over and were rewarded with a clear commercial stumble -- a situation somewhat forgotten in light of Adam Levine's 2011 elevation to superstardom via his judgeship on The Voice. Levine didn't abandon his band once he became a TV star. Just as the first season finished, Maroon 5 recorded a duet with Christina Aguilera, 'Moves Like Jagger,' a single far more modern than anything on Hands All Over and, not surprisingly, a much bigger hit than anything from that 2010 LP. All this set the stage for 2012's Overexposed, its title a smirking allusion to Levine's ubiquity, its sound a reflection of how dearly the group wishes to retain the large audience they won once again with 'Moves Like Jagger.' Electronic rhythms easily overshadow acoustic rhythms, with even the natural swing playing as somewhat sequenced; each song gets a brittle, multipurpose surface, as easily adaptable for adult contemporary radio as it is for the club. Hooks stab with a steely confidence but they just break the skin; they prick instead of pierce. It's the productions that count, not the songs. What matters is the their cool, sleek sound, the glassiness of the ballads, the cold glint of the dance-pop that dominates this record. Maroon 5's soft swing as a band is pushed to the background -- a bonus closing cover of Prince's 'Kiss' makes that shift apparent, as the band reworks it into a rockabilly shuffle worthy of Elvis' stage show -- and it's missed, but not greatly. Even if Levine's voice sounds a trifle thin in these cool, crisp settings, the band -- with the assistance of such guaranteed hitmakers as Max Martin, Shellback, and Ryan Tedder; Levine's usual co-writer and lead guitarist James Valentine only has four credits here -- is adept at navigating modern pop waters, creating a record that feels briskly contemporary. They've bent with the times instead of attempting to have the fashion follow them, which may be a wise move after the general disregard paid to Hands All Over -- Overexposed may not hold together as well as that album, but it's sure to keep the audience won over by The Voice. [A clean version was also released.] ~ Stephen Thomas Erlewine
Read More Read Less