The Leisure Suit Larry series has produced some of the more crude, offensive, and also humorous games. Depending on your sense of humor, Leisure Suit Larry: Love for Sail will provide you with enough out-loud belly laughs to rival a Def Jam comedy show. 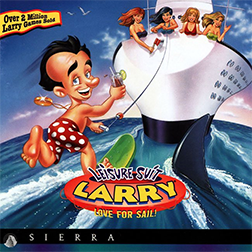 The objective of the game is to earn an evening with Captain Thygh of the PMS Bouncy, the cruise ship upon which this adventure takes place. In order to earn the attention of the attractive Captain Thygh, Larry must prove his worthiness by wining a series of contests. Of course, Larry Laffer doesn't have the talent or skill to win any of these competitions on his own, so the player must help him find creative ways to cheat, using various objects found around the cruise ship.

The cartoonish graphics in Leisure Suit Larry: Love for Sail show vast improvements over those of the previous titles in this series. Actually, the only thing that has not changed visually since the first game is the appearance of Larry Laffer himself. He is still the short, balding, leisure suit-wearing fellow, every bit as much an 'anti-chick magnet' as he was in the very first Leisure Suit Larry game

The music and sounds in Leisure Suit Larry: Love for Sail are also very good. Each area has its own theme and sometimes, popular songs are featured as well. Two of the better-known songs in Leisure Suit Larry: Love for Sail are 'Le Freak' by Chic and 'Get Down On It' by Kool & the Gang. These songs were perfect for the occasions in which they were used and made me want to play those particular parts of the game over and over again. The game features several celebrity parodies as well. Each character has a humorous voice, mocking his or her real-life counterpart. For example, a character named Drew Baringmore has a valley-girl like accent, much like the real-life Drew Barrymore.

This is an enjoyable game and is recommended to any lighthearted and adventurous members of the intended mature audience.

Replay Value: Lots of 'easter eggs' and secrets add to the replay value.

Love for Sail! is the sixth game in Al Lowe's Leisure Suit Larry series. Larry unexpectedly receives a ticket to a cruise ship. Upon the arrival of the passengers, a mega-contest is announced. This contest includes various kinds of sports and activities, from bowling to love-making. The winner will get to 'score' with the sexy Captain Thigh. Naturally, there is no way Larry can win this contest fairly, so he must use his brains to solve the tricky puzzles of the game, and to cheat his way into the Captain's bed. 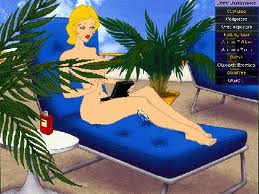 The game features a context-sensitive interface: clicking on an object brings forth a series of verbs which the player can choose in order to interact with the given object. In addition to that, it is possible to try and type any other verb (provided the game understands it), just like in old adventure games with text interface. Sometimes it is necessary to think outside of the box and to come up with unusual actions in order to solve a puzzle.

How to run this game on modern Windows PC?

Leisure Suit Larry Love for Sail Free Download for PC is a video game, part of the Leisure Suit Larry series. It was the last LSL game written by series creator Al Lowe, and the last (to date) to feature original protagonist Larry Laffer as the main character.

Despite being known as Leisure Suit Larry 7 during its development, Love for Sail! was actually the sixth installment in the LSL series due to the (apparently intentional) nonexistence of a fourth game.

After many of the LSL games had gained a reputation for not actually featuring all that much raunchy content when analysed, Love for Sail! included some much more risqué elements compared to previous installments. It also featured more fleshed-out, cartoon style graphics than its predecessors, as well as full voice acting.

This was the first LSL game to receive an ESRB rating (Mature) upon its original release.