IH Serial Numbers. Example: 723 For the 1973 model year, the VIN was modified to consist of a 5 character model code, followed by a letter indicating the model year of production, the plant indicator, a production line within the plant indicator, and a 5 digit serial number that started with 10001 each year. [ Return to Main List ] There are 40 models listed for Farmall. Just click on a model to see the serial numbers and the years it was manufactured.

The International Harvester Company (IHC) has been building its own proprietary truck engines since the introduction of their first truck in 1907. International tended to use proprietary diesel engines. In the 1970s, IHC built the DVT 573 V-8 diesel of 240 and 260 hp (179 and 194 kW) but these were not highly regarded and relatively few were sold. Their DT 466 engine started in 1974 and was very successful.[1]

The first IHC 'Highwheeler' truck had a very simple air-cooledhorizontally opposed two-cylinder engine with a 5-inch (130 mm) stroke and a 5-inch (130 mm) bore, and produced around 18–20 hp (13–15 kW). Displacement was 196 cubic inches (3.2 L).[2] In 1915 a new L-headwater-cooled 201 cubic inches (3.3 L) inline-four engine appeared.[3] While International's own engines underwent constant developments, the pace of truck production in the twenties was such that others' engines (from Waukesha, Buda, and Lycoming for instance) had to be installed in some parts of the range.[4]

International Harvester's first in house six-cylinder engines appeared in some of the 1926 S-series trucks, seemingly a response to market pressures rather than to any particular need for such a layout.[5] In 1928, a new heavy range of trucks (the HS-series) built around a series of engines from Hall-Scott appeared. These engines were used by IHC for some heavy-duty applications until 1935, although their own large engines (525 cu in (8.6 L) FBD and 648 cu in (10.6 L) FEB) had appeared in 1932.[6] The medium-duty 1930 A-series trucks received the all-new 278.7 cu in (4.6 L) FB-3 six-cylinder engine, with overhead valves and seven main bearings. This was complemented by larger versions of the same engine and was built until late 1940 (as the FBB),[7] the line-up being expanded downward by the smaller FA-series (later FAB) in 1933.[8]

The HD inline-sixes, later to become the first in International's long running 'Diamond' series, first appeared in the C-30 truck of 1934.[9] Available in three different displacements (see table), they were renamed 'Green Diamond' in late 1940 for the 1941 model year after a number of detail improvements.[7] This year also brought the new 'Blue Diamond' (FAC) and 'Red Diamond' (FBC) engines. A post-war version of the 269 cubic inches (4.4 L) Blue Diamond became the 'Super Blue Diamond' when installed in the post-war medium L-line trucks. The Blue Diamond engine lived on until the early 60's renamed as Black Diamond engines, the BD-282 and BD-308.[10] 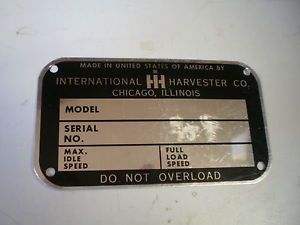