Much of recorded history has been the story of fathers and sons, with women written down merely as the familial covalent bonds that connected them when they were recorded at all. The names of fathers pass to their children, here and in Westeros, where men announce their paterfamilias to strangers as a way of locating themselves, both in society and in power.

Dead fathers loom large in 'Eastwatch,' where Cersei quotes the late Lord Tywin and insists that they must fight the dragon queen as he would have, and where Sam echoes the sentiments of his own abusive father—“I’m tired of reading about the achievements of better men”—before setting out to make a name for himself. Meanwhile, Tyrion returns to King’s Landing and remarks that the last time he was there he killed his father with a crossbow; Davos says that the last time they were there, Tyrion killed his son with wildfire. When Davos goes to fetch Gendry, the young smith claims to be tired of making armor for the people who killed his father, and heads off to meet Jon, announcing that they are both bastards of great men and should be great friends.

A certain utilitarian sexism lurks in these conversations; in a world where all power and worth derives from men, so do all discussions of power and worth, and on and on and on. But the intense dadliness of this episode feels a little strange at a time when the old ways are changing, when virtually all power in Westeros now resides in the hands of women.

Where are the mothers now, except as artifacts of emotion in their children that go largely unmentioned? Catelyn Stark, who in the books became a force of embodied vengeance with more parallels to Arya than Ned ever had, has all but disappeared into the memory in the show. Joanna Lannister, who died giving birth to Tyrion, is referenced only as fuel for Cersei’s anger against the boy she died giving birth to. Jon’s true mother, Lyanna Stark, played a similar role for Robert Baratheon, a man who admitted that he barely knew her, only that she was what he always wanted; Jon still doesn’t know her name. Daenerys named her dragons after her husband and her brothers—one of whom abused her for her entire life. Still, he got a dragon. Her mother’s name was Rhaella, though we never hear it.

Now that women are running the show, it’s fair to ask if they are doing any better than the men they replaced. Cersei, the ultimate white feminist, set off a bomb that killed thousands in order to claim her power but has used it only to build herself up and push everyone else back into their place. Daenerys came on a platform of populism—“breaking the wheel” of oppression—and descended on Westeros with a fire meant to cleanse the world of its horrors, though it comes with horrors of its own. Sansa has slipped into her position the way so many women have: through the proxy influence of her father and brothers, even as she plays the game better than they ever did.

Arya wears no crown and has learned not to rule not people but death itself, the one power that governs us all. Her game is a very different one, relying not on diplomacy and compromise, but the pointy end of a sword. When Sansa moves carefully to handle the Northern lords questioning Jon’s decisions, Arya’s response is unforgiving: “They were insulting Jon, and you sat there and listened.” They might not, she says coldly, if they were afraid of losing their heads. Arya taunts her sister, says that she’s playing the angles in case Jon doesn’t come back. Really, Sansa is doing precisely what Littlefinger advised her to do: “Fight every battle everywhere, always, in your mind. … Live that way and nothing will surprise you. Everything that happens will be something that you’ve seen before.”

If you live in Westeros and you don't account in some way for the deaths of your loved ones—especially if they are fighting an army the undead at a severe tactical disadvantage–you’re either in denial, or naive in the extreme.

It’s a mercenary way of thinking, but a sensible one. If you live in Westeros and you don't account in some way for the deaths of your loved ones—especially if they are fighting an army the undead at a severe tactical disadvantage–you’re either in denial, or naive in the extreme. Really, Arya is just kind of being an asshole, flinging another lump of food at Sansa across the table on her pretty dress.

And that’s all it would be, probably, if Littlefinger didn’t get involved. Underestimating him has always been a fatal move. While Arya may have established herself as a shadow assassin, slipping her knives into the blind spots of duller men, Littlefinger has been playing this game for a much, much longer time, and he knows an opponent when he sees one. The problem is, he sees one.

Arya always did balk when it came to being no one. No one would not have announced to her foe, before she killed him, that she was Arya Stark and wanted him to know that. No one would not have advertised their sick swordfighting skills in the courtyard of Winterfell. What did Ned Stark say once? 'I don't fight in tournaments, because when I fight a man for real, I don't want him to know what I can do.”

That’s Arya's weakness, perhaps: wanting them to see. Littlefinger knows now, and so he manipulates, because that’s what he does.

That’s her weakness, perhaps: wanting them to see. Littlefinger knows now, and so he manipulates, because that’s what he does. He takes the message that Cersei coerced from Sansa long ago—the one in which she disavows Ned and supports Joffrey—and plants it right where he wants Arya to find it, perfectly imperfectly hidden. It’s a particularly deft move because it confirms all of Arya’s worst opinions about Sansa, the girl who once sided with Joffrey against her at the expense of her friend Mycah’s life. Why wouldn’t she think that Sansa is still that feckless and disloyal, a girl who could once think of nothing but boys and dresses and being pretty? “You always liked nice things,” Arya glowers, when she learns that Sansa has moved into their parents’ room. “They made you feel better than everyone.”

Littlefinger’s scheme is a bit of an odd one, though, if his goal is to drive a wedge between the two sisters. Rather than undermining Arya in Sansa’s eyes, he has elected to do the opposite—a far more volatile move. What will Arya do if she sees Sansa as betraying Ned and Jon? This is a girl, after all, who advocated for cutting off the heads of allies who question their orders. And doesn’t that sound a little like Cersei too?

The one redeemable thing about Cersei was always her love of her children, and even that was a fault. When Daenerys says that no matter how great and terrible her three dragons become, she still sees them as her children, it’s hard not to think of how the Lannister queen once coddled her own monster. Daenerys, too, is now so much more willing to loose her cruel children on the world. Once, she locked them in a crypt because they killed a single innocent. Now, she lets them fly free in Westeros. What has changed, if not her?

Daenerys is all but ready to win the war with her nuclear dragons, which has been the case the entire season, and which the show has found endless reasons to delay. I’m guessing this is because the showrunners want the ice zombie battle in this season and the siege of the Red Keep next season, but the end result is a fairly nonsensical plan from the braintrust back at Dragonstone: With an army of White Walkers ready to cross the wall, Jon and his coterie of bros decide to ride all the way north, steal one of the wights, and then go all the way back south to show it to Cersei.

Is the zombie army supposed to wait patiently while they enact their plan? How is any of this faster than Daenerys wiping Cersei out and then heading north with her ultra fast dragons? There are no answers to these questions except “because the plot,” so don’t bother to ask them.

Cersei is fomenting her own questionable schemes, and it’s also hard to say exactly what they are. When Jaime returns from battle with the news that they are royally boned, Cersei says simply that they will win by being clever… somehow? And also pregnant? With another incestuous child growing inside her (possibly), it seems like the final confrontation will be between two mothers after all. 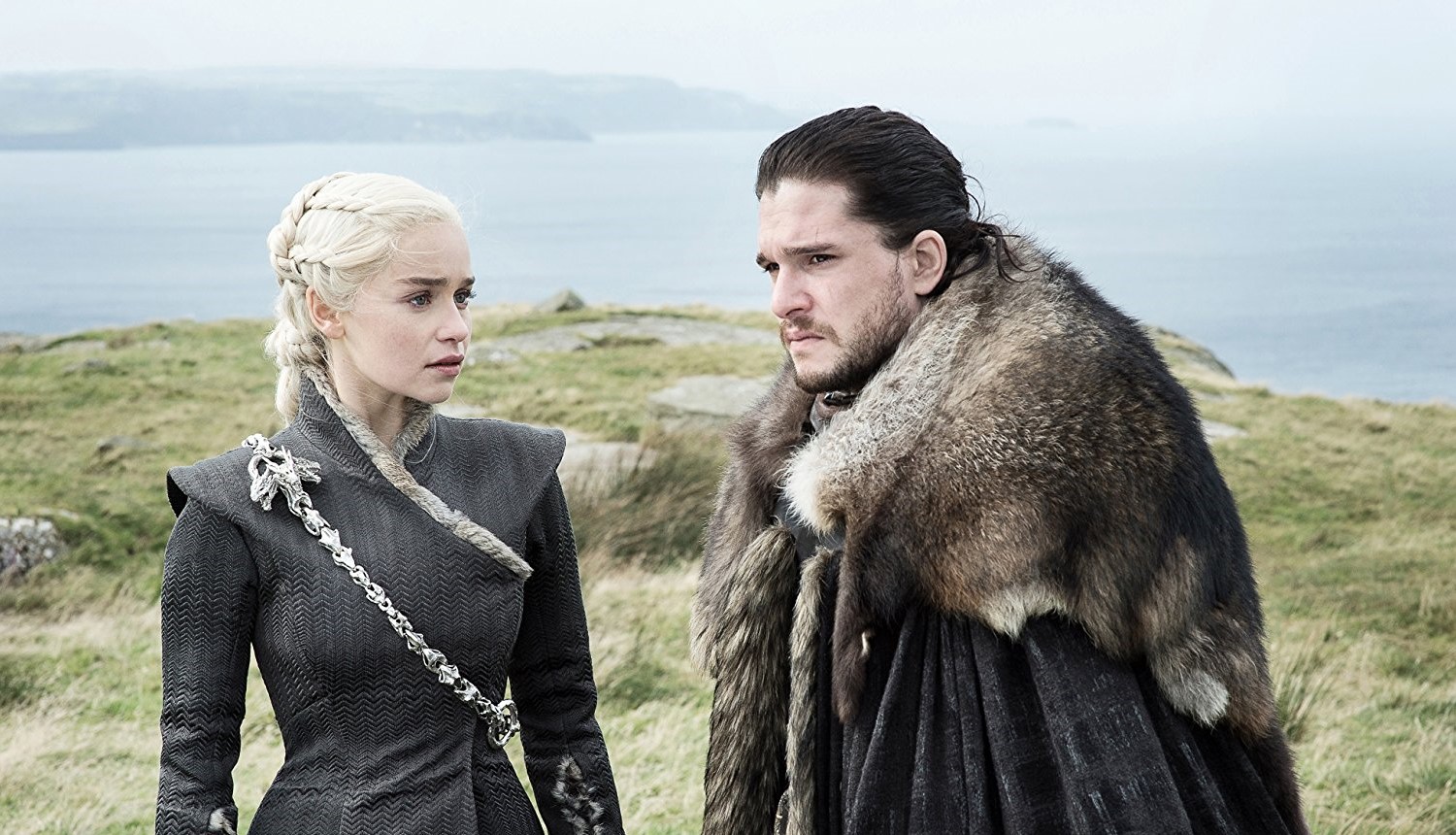 Daenerys Targaryen's dragons on HBO's Games of Thrones are fan favorites, and WIRED has an incredible, exclusive look at how they were brought to life with feature film quality by the visual effects artists at Pixmondo. Virtual wind tunnels, water simulations and real world references all played a part in constructing their realistic behaviors.